A Week in my Life Abroad: February 17th-23rd

Today’s classes felt super long, especially after being out at the Jonas Brothers concert last night with my best friend from home, who came from Barcelona to visit for the weekend (s/o Sammie). The highlight most definitely was finishing off the day with a cooking class through my program. We got to make paella (my first time eating it here!!!), tortilla (an extremely simple but delicious dish, literally just a frittata of eggs, onions and potatoes), and a traditional cake from northern Spain made with almonds and lemon zest. Honestly, we basically did the prep work and our leader did most of the cooking, but you best believe I had a great time eating all 3 dishes. And as the icing on the cake, Madison, Alex and I got gelato after… oops! 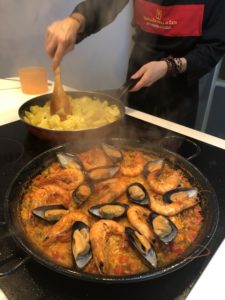 Paella and Tortilla in the making

I went to Square for a HIIT style workout class after school, and then went to Rebel Cafe to write a blog post on exercising abroad (my workout inspired me). Later on, Alex and Madison (my roommates who I was friends with back home) got dinner and churros with two friends from our business fraternity who will be studying in Madrid for the next 6 weeks through a 3 city study abroad program. It felt so great to be with good people who remind me of home/school! 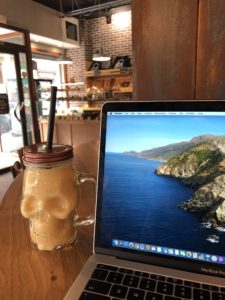 I took a GREAT nap after class before going to the Prado for my evening class. Then, a 10 minute walk brought me to this itty bitty nail salon where just one sweet woman was working. We held a lovely conversation most of the time and it felt good to practice my Spanish with her. She was super encouraging and taught me a word for cuticles (borde). She spent a decent amount of time working on my nails, and I love how they came out. Then, I bought falafel from Aldi and made it for dinner but I was not a fan.

I woke up feeling suuuuper energized and full of life. I showered and did most of my packing at 7:30 AM before leaving for school. After class, I tried Bikram hot yoga for the first time. I completely sweat through my sports bra and leggings (the room is 104 degrees F), but I loveeed it. It was definitely outside my comfort zone to take a class in a new style taught completely in Spanish. I was intimidated at first, but then the environment really relaxed me and made me forget about any fluttering thoughts running through my head. And then, the most exciting part of my day: I flew to Zurich, Switzerland with my roomies Madison & Alex !!!! We stayed at a hotel right near the airport which was tiny but clean and had kind staff & I’d totally recommend (Ibis Budget Hotel Zurich Airport). The only downside, which was pretty rough, was that we used the Swiss equivalent of GoPuff to order Ben & Jerry’s thinking we would each get a pint. The delivery guy showed up with 3 of the baby single scoop containers, and they cost 8.50 franks each! (YIKES!)  Tomorrow morning we are taking a train to Interlaken at 9am. This has truly been a dream trip of mine and I am excited to relax, adventure, and appreciate the incredible views this city has to offer.

After transferring trains twice, I arrived in Interlaken! We missed one of our transfers because the train arrived at the station late, but had no problem getting on the next train which came a half hour later. The train ride had such pretty views, and then when we arrived in Interlaken I was floored! This place is breathtaking. I dropped my luggage at our Airbnb (which looked like a cottage), met up with my long-time friend Sam who came from Barcelona, and had chicken and vegetables with some yummy sauce at Cafe du Paris. Then later in the afternoon, we took a bus to Lake Thun to climb up to the St. Beatus caves and see the sunset. Holy wow! For dinner, I had dreamy fondue at Restaurant Baren. 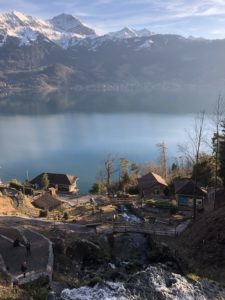 TODAY IS THE DAY! I went skydiving !!!! It is difficult to properly express what this felt like, but it was an incredibly moving experience. I was overwhelmed by how BEAUTIFUL our planet is, how fast I was free-falling (125 MPH for 45 secs), and the fact that I legit just jumped out of a plane! This has been a bucket list item for me for several years. I was extremely grateful in that moment to be doing something that was truly a dream, and even more grateful when my parachute opened and I knew I was going to stick the landing. Midday, we went to Funky Chocolate Shop where I enjoyed hot cocoa and chocolate-covered strawberries. Then to finish off the day, we took the bus to Lake Brienz for the most colorful sunset I have ever seen. From every angle I turned, there were incredible Colors and so so much beauty. Then, to save a lil bit of money, we cooked a pasta dinner at our AirBnB which was super fun. Adventures, chocolate, and breathtaking views… take about a PERFECT day in my book. 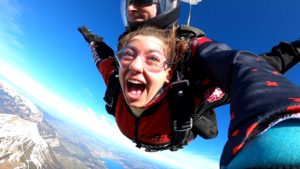 Free falling over the Alps! 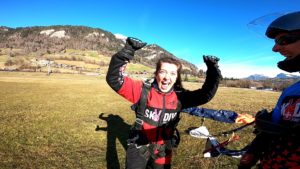 Mood after sticking the landing!

Long. Travel. Day. I woke up a lil after 6AM and was on 2 trains, a plane, and a metro before getting home around 3:30. I took a much-needed nap before live-streaming the last 2 hours of Penn State THON. It was bittersweet not being there to support my friends and share in the moving energy of this weekend, but I was so proud that my business fraternity surpassed its goal of raising $100,000 and that my friends Emma and Anna were the second highest pair that raised money independently. I have to get to bed at a decent hour before the school week grind starts up again tomorrow… 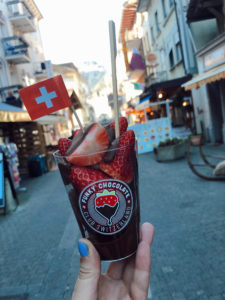 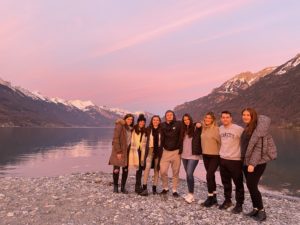 Let’s be friends on IG!